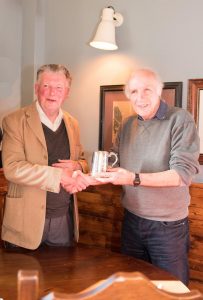 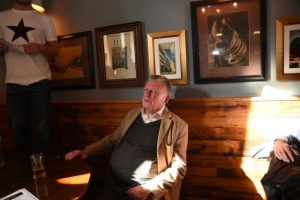 Kent Athletic CLub’s Ron Hale celebrated 70 years as a member of the South London club with teammates on 13th May at a function at the Station Hotel in Hither Green.

Ron joined the club on 12 May 1947 in his early 20s and he went on to represent the club’s senior team in a variety of distances over the country, road and track. Some highlights from Ron’s early career, as the Kentish Mercury from 1953 reports, Ron was winner of a XC match vs Croydon and also competed in a match vs Stock Exchange as well as winning a local South London XC handicap. As he moved into the Masters categories he continued to compete and win medals at county and national level well into his 80s. As a 75 year old he was still running under 55mins for 10000m.

Ron has served as club Secretary and President and has been hugely active in the running of the club over many many years. Never was this more the case than the role he played in keeping the club going in the late 70s when it nearly folded, along with another member Peter Yates, the club, which recently took Gold and Silver Medals in the VMLM England Athletics team race, might not be here today.

Ron’s commitment to the sport goes far beyond the club. He has served the Kent County Athletic Association in numerous positions, including as an official and as a county team selector. Ron continues to be an active member of the club today. He’s a regular face at Ladywell Arena on Tuesday evenings and he still helps marshalling at events. Now in his 90s, Ron remains an inspiration to his teammates as he still continues to get out for a run in Beckenham Place park.

A great day of athletics was had in sunny Dartford on Sunday.  Kent AC won a match in the Southern Athletics League for the first ever time, dominating the fixture to beat Hercules Wimbledon into second place.

Official man/women-of-the-match awards are given to the 6 highest ranked performances on the day, several Kent AC athletes featured:

– Emma-Louise Wagstaff got a woman-of-the-match performance for her excellent 60.7 to get 2nd in the 400m.

– Sarah Hanley ran a remarkable 5,000m debut in 18.45 for a woman-of-the-match, very well deserved for a solo run in the heat of the afternoon with a hangover (and no water).

– Legendary Kent AC multi-eventers Rawlston Morian and Shaun Mulligan were surely men-of-the-match, doing 6 events each, coming first or second in every one (and they also did the relays).

– Rowan Crichton came 2nd in the steeplechase, returning to the event for the first time for 10 years .

– Shamariah Notice came 2nd in the 100m and 200m and ran an excellent final relay leg.

Kent AC had people in almost every event.  So many people showed great willing, talent and versatility to score loads of points for the team:

– Tracey Griffiths scored highly in the Javelin, Shot and Discus.

By the time we got to the 4* 400m relays there weren’t many athletes left standing.  With the overall match win in the bag we’d agreed to take things relatively easily, but Kent AC competitive spirit took over and there were two exciting races:

– Sarah, Victoria, Lydia and Isabel soon realised that victory was in their reach and the pace quickened, Lydia opening up a gap and Isabel fought hard on the anchor leg to secure a narrow win

– Calum, Rowan, Rawlston and Shaun couldn’t resist racing hard against a strong team from another match, Shaun almost chasing them down in an exciting finish. 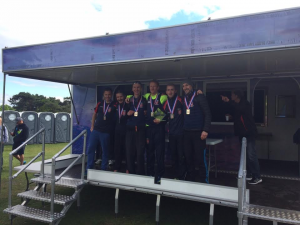 Luke had wanted to make sure that everyone was aware of the brilliant day Kent AC’s M35s had on May 20th. The team achieved victory in one of the most prestigious masters events, with all the top vet clubs taking part. Clubs from as far as Scotland and the South Coast were in attendance, and Luke has been quoted as saying “To my knowledge it’s the first time in the club’s history that we’ve won the event.”

It seems every member of the team ran fantastically well. The race was a close one, with Kent AC passing local favourites Tipton in the last quarter of the last leg. Rob Laing led off and ran a superb leg to bring us in 17th. It shows the quality of the field that Rob – who is in great form – missed out on a place in the top ten. Tom Muddiman took over on leg two and cut his way through the field, taking an amazing 13 places and bringing us in to fourth.

Tipton had unfortunately already built up a lead of over a minute and a half on us, but Neil Phillips ran a great third leg, in fact putting in the fastest performance of all runners on this leg. Despite this, we were still left in fourth – albeit with Tipton’s lead significantly reduced.

Fortunately, Pete Lighting stormed the fourth leg, moving us up to third and coming in at third overall in leg four. Putting in another brilliant performance was Adrian Lowther, who ran the fastest of all the leg five runners and overtook a very strong Salford runner to bring us up to second.

The stage was then set for Chris Greenwood on the last leg, starting off 40 seconds behind the leaders Tipton. The rain lashed down but this only seemed to speed Chris up, and he soon chased down the Tipton lad, catching him up with 800m to go. As he overtook him he worried that he might kick again, but that was not to be. In spite of the very poor conditions Chris surged past, taking us to the national title and putting in easily the fastest time of all leg six runners. In the end, a race that lasted over an hour and a half was won by just 14 seconds.

As Luke said after the event, big congratulations to the six M35s – all of whom ran amazingly. He pointed out that we won the event without some of the talented runners  who would also be eligible – including  the likes of John Gilbert, Russ Bentley, Lawrence Avery, James Bowler and Johnathan Tipper. He speculated about the prospect of us entering two teams next year. If people were available and the event didn’t clash, then perhaps first and second place? Now that would be really exceptional! 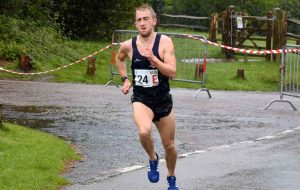 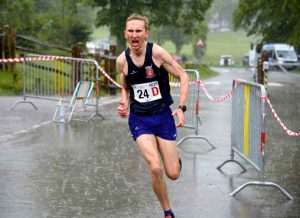 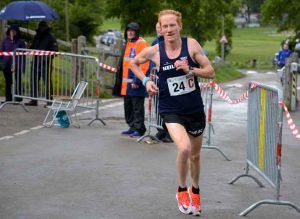 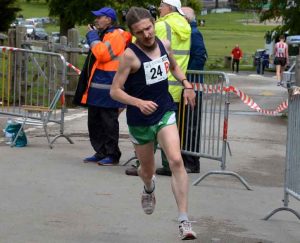 A great result where the A team definitely moved forward from the last few seasons and gained a valuable 3rd place – yet were only a handful of points away from a Win. On a surprisingly warm day conditions had improved in the week except for an unpredictable wind that had a mind of its own !

We were filling in a few very early events and the guys managed some solid points until Irish International Sean Breathnach threw well securing a great win in the A Discus with a throw of 47.00 m. He was backed up well by Courtney Green who starting his season late yet managed 4th place in the B string with a best throw of nearly 35 m. Another of our Internationals was next up and he did not disappoint as Jack Green secured an easy A string Win in the 400 Hurdles running his best ever season’s opener with a time of 50.27 secs despite the blustery wind.

It was great to see Jonathan Browne compete for us again after an injury blighted 2015 season and he ran well to secure 3rd place in the A 100 m despite having started training late – but watch this space for some good times from him later on in the year.

Another England International was next up and Conrad Williams ran well in the B 100 m as he came 2nd in the B 100 m in a time of 10.88 secs before embarking on quite a few more events. Next up was a regular performer for us, Ben Harding, who ran a brave yet mature race as he took the field apart in securing a fine Win in the A 800 m with a time of 1 min 56 secs. A performer filling in then ran well as new boy , Jordan Weaver, ran a mature race and secured 5th place in the B race. Next up were our Steeplechasers, Richard Phillips and Neil Phillips, who both had solid runs securing good points as Richard secured 4th place in the A section of the race and despite a very wet fall at the water jump Neil delivered well securing a fine B string win for us. Our 110 m hurdlers were next up and Team captain Joe Appiah proved his worth to the team as he secured a fine 5th place in 16.46 secs and he was backed up well by Ethelbert Metzner who ran a well judged race to secure 4th place in the B race running a time of 18.16 secs.

Next up was Shawn Wright who demonstrated his fine improvement in the A 400 m as he ran a mature race in a time of 48.73 secs – watch this space as we expect even more improvement from him later on in the season. Another new recruit. Damien Powell, then had a solid debut as he was just edged out in the 200 m as he came 6th in the A race but expect a lot more from him as he learns his trade in a highly competitive event. Next up was star performer Conrad Williams who secured a fine B string win in a time of 21.97 secs – despite a difficult wind.

The results service was slow and we may have been in 5th  place at his point but our superb run was about to start with the Triple Jump as we secured near maximum points. Scottish International Chuxx Onyia was on form as he secured a fine win for us with a jump of 14.52 m despite the difficult wind conditions and he was backed up well by David Wellstead who jumped 12.91 m to secure 2nd pace in the B string. Then came Rory Gunning who despite the long wait secured a valuable A string Win for us in the Javelin as he threw just under 60 m despite very erratic wind conditions – expect a lot more from him as the season progresses. The last track, bar the Relays, then earned great points for us as a relatively  unfit Nick Torry judged the race to perfection working his way through the field in the 3000m and he secured 3rd place in the A section whilst another new recruit Tom Mower battled hard all the way being rewarded with a fine 2nd place in the B section with a time of 8 min 57 secs. Not to be outdone Jordan Weaver had a race to the line with Nick to secure an excellent time of 8 mins 48 secs and proved the management wrong!

The team were on a roll by now and another fine win came in the shot as Sean Breathnach secured a fine win with a throw of 16.92 m and Courtney Green secured 2nd place in the B section with a throw of 12.72 m. Hopefully with some practice he will throw even further !

The two relays were negotiated successfully and new recruits stepped up to the mark well as Nathan Brown and Israel Ajala negotiated the 4 x 100 m relay successfully and with more practice can look forward to it. We had a scratch team in the 4 x 400 m and despite jogging around we secured 6th place a two clubs fell foul of the rules.

A long wait for the final result ensued, with Ken stating that the original result that had us in 6th place was overturned, and our rightful 3rd place rounded off a successful day in which our superb team morale was duly celebrated.