We stayed up comfortably but blew any chance of promotion on the day as despite some great performances on the day and some superb filling in as we lacked the consistent depth to really trouble most teams.

We had no less than 5 A string wins and 1 B string win with Man of the Match Ben Harding leading the way with a great front run in the 800 m and a well judged run in the 1500 m to earn his first ever double for the team. He was backed up well by club stalwart Chris Greenwood, who did 4 events on the day, after a great 2nd place in the 3000 m Steeplechase and he was backed up well in the B string by Richard Phillips who also secured a fine 2nd place in the B string.

A great top quality run from Nick Torry was one of the highlights of the day as he stormed an easy win in the 5000 m with a time of 14 min 25 secs and he had fine backing up from John Gilbert who ran tactically well as he won the B string in 14 min 56 secs.  A great sight to see the first two home in Kent AC colours.

Chuxx Onyia  delivered well in securing a good Win in the Triple Jump with a leap of 14.56 m and completed a full house of all 4 wins for the season  despite carrying an injury from the Long Jump that we hope does not stop him winning the Scottish Champs next weekend. One of only three field eventers present on the day, Rory Gunning, then did well as he secured a fine win in the Javelin with a throw of 61.34 m and made then long trip from Dublin all the more worthwhile – our thanks must go to him as he was also an ever present for the year. Our last field eventer was Courtney Green who secured solid points despite the absence of his usual partner Sean Breathnach as he threw 12.30 m in the shot earning himself 6th in the A string and he backed this up well with a 5th place in the A Discus. Also a couple of 5th places in the 400 m  Hurdles and 110 m Hurdles was team stalwart Jean Charles Roghi who yet again proved his worth to the team.

Last but by no means least were Shaun Mulligan and Ron Taylor who filled holes in the Declaration Sheet in no less than 12 events and who secured 38 points into the bargain. A great team effort from real Kent AC men !

So a disappointing end to the season which had promised so much and with a review of the whole team from Joe and Ken to come we hope that we can get more men out next year to add to the real and important efforts from the 16 men who did the business well for the club.

Kent AC finished the season 6th in our division in the SAL, our highest ever position.  Not bad, but the signs are there that we can push on next season and get promotion!

We were third on the day in our final fixture.  A creditable performance given we were short of numbers, holidays and a clash with the British League meant many of our regulars were unavailable.  Those athletes that competed on the day did brilliantly to cover the events.

Highlights of the day included:

Thanks to everyone who competed on Sunday, and throughout the season.  The enthusiasm of Kent AC members to turn out at these events and try hard at whatever the team requires from them is inspiring.

Several people have competed in athletics for the first time this season which is brilliant, and many people have commented on the good atmosphere at the meets, helped by the coaches and spectators who have turned up and offered support.

The regular team of volunteers have been brilliant this season: Rob Moye, Norman Fairbrass, Annabelle and Ed Hadlow, Bernie Hutchinson and Ken and Pete, thank you all very much.  Also thanks to Charlie who turned up on Sunday expecting to sit on the grass and watch, but was talked into collecting javelins and monitoring pole vaults.

Jack Green reached the semi finals of the 400m hurdles in the 2017 World Athletic Championships in London.

David Lima equalled this fine achievement by getting to the 200m semi-final.

Both of our athletes made the semi finals of their events – quite an achievement given the standard ! Our Portuguese athlete David Lima ran the 200m heats and qualified to the semis with 20.54 secs. In the semi finals last night  (lane 3 in picture) he came 4th with 20.56 secs and missed the final by a few places. Real progress from him which bodes well for the future.
Jack Green has had a great season leading to the Championships dipping under 49 secs but couldn’t quite maintain that standard in London. He ran the 400mH heats in 49.55 secs and in the semi finals 49.93 secs,.coming 5th. He had a clear run at the hurdles this time which indicates that there will be more to come from him. None the less a fine achievement at the highest of standards.
Well done to both on a great achievement, something that they can be really proud of and something that the five club members present in the stadium were privileged to witness.

Joe has been competing in the 2017 European Masters Championships in Aahus Denmark.

In the long jump he held the lead until the forth round with a leap of 6.47 meters. He had to settle for silver behind the Swede Mattias Sunneborn who pipped him by just one centimeter.

However in the 110m hurdles Joe struck gold with a winning time of 15.22 secs. He was denied a championship record by a strong head wind.

Joe’s final medal and second gold came in the men’s 45+ 4x100m relay where he ran the first leg.

Here’a a good article over at the GLL foudation website: http://www.gllsportfoundation.org/joe-appiah-euro-masters/#more-3780 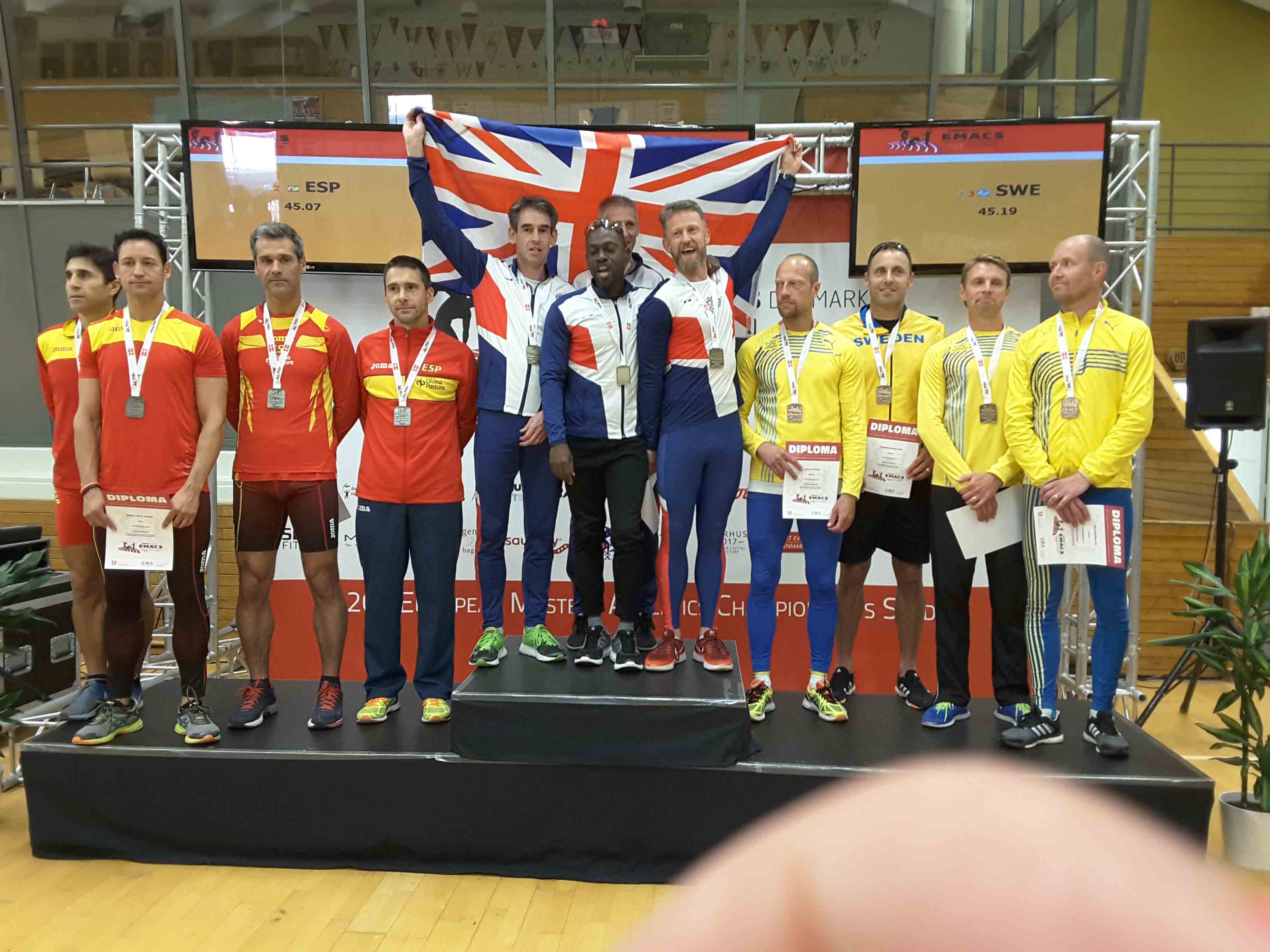 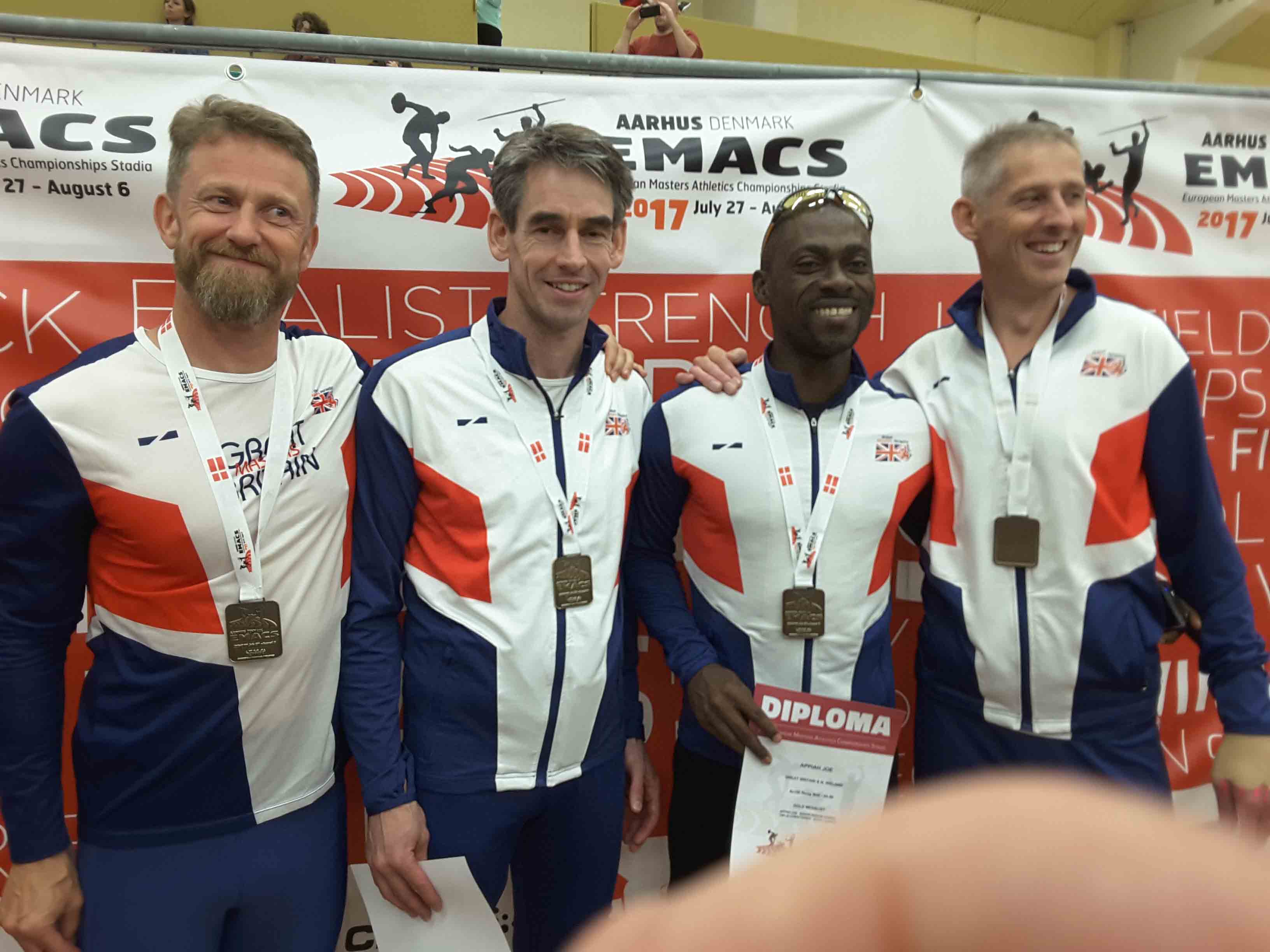 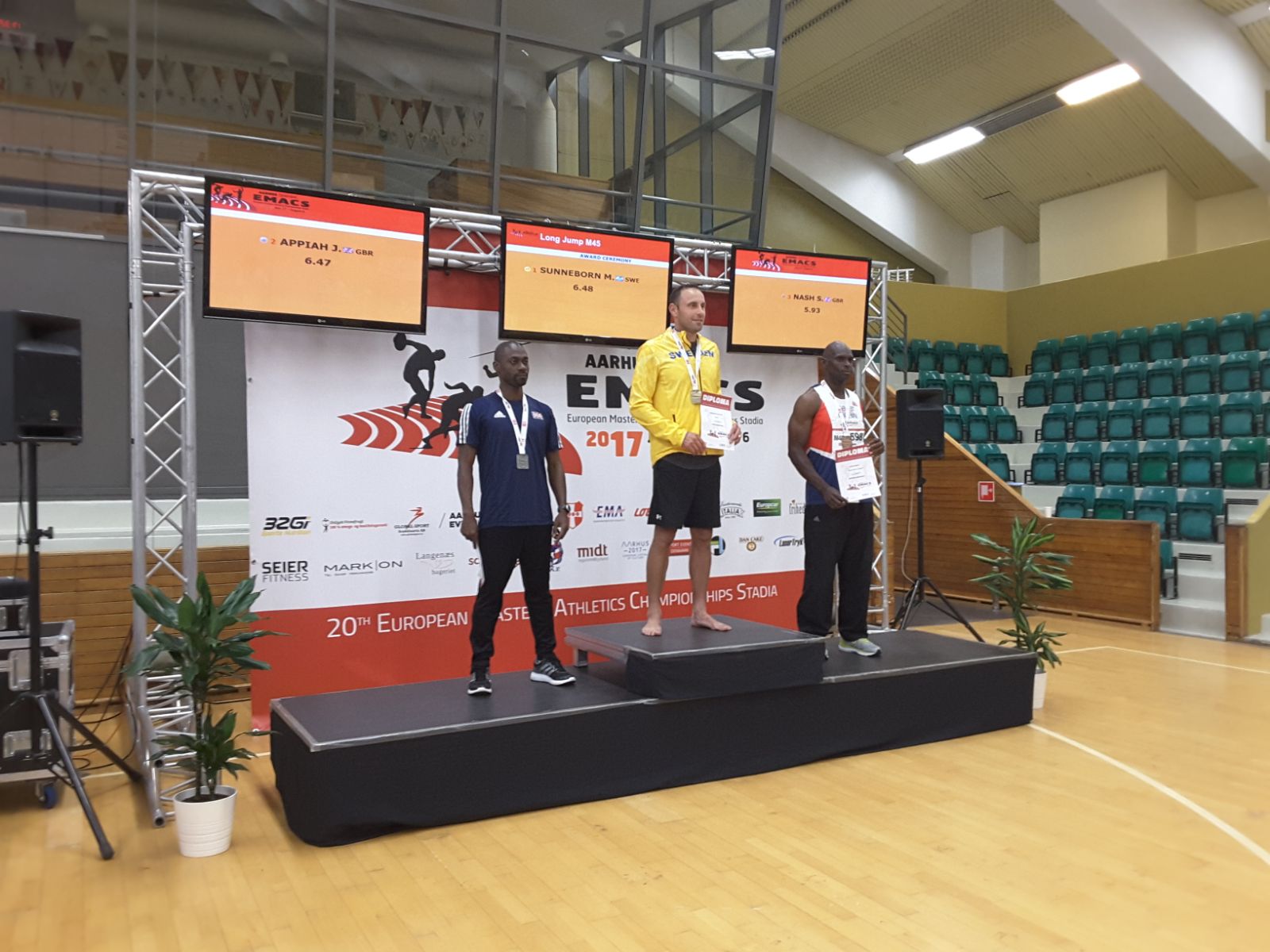