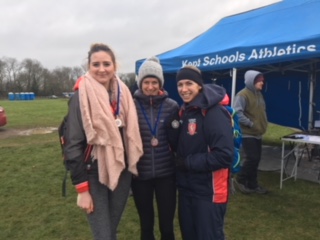 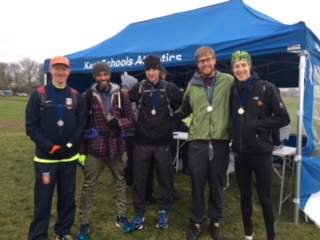 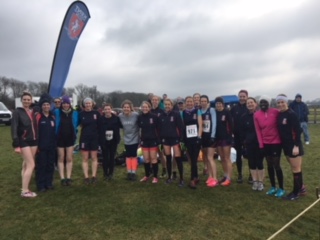 John Gilbert edged a step closer to making history on Saturday when he notched up his seventh win in these championships. If John can win another, he will equal the eight that cross country legends Barry Roydon and in a different era, Frank Sando, notched up. As well as the gold medal again for John, our men’s team came away with silver medals in both the six and the twelve to score, a notable achievement considering there were a number of our big hitters missing from the race. I for one was disappointed not to see Owen Hind, back briefly from the States, not testing himself against John.  However, Owen has a had a gruelling schedule of races and he probably needs a rest. But being a true club man, he was an interested spectator cheering our runners on.

John set out in the same fashion as he did when he claimed victory in the South of the Thames race at Aldershot. This was to more or less go hard from the gun and see if anyone could match him. For the early part of the race he did have company in the shape of two Tonbridge runners, George Dougan and Ben Cole. In the initial stages Dougan looked ominously comfortable as he sat on John’s shoulder. However, the look may have been deceptive as with under twenty minutes of running John forged a gap that grew to quite a substantial one by half way in the race. His pursuers never really made serious in roads into John’s lead and by the end he had won by a clear distance.  As previously reported, a feature of races this season has been Dame Dibaba going off like lightning. However, perhaps a bit of coaching from Pete Lighting saw a slightly restrained Dame at the start of this race. He was nevertheless well to the fore in the race from the word go.  For much of the race he was in a group that was vying for places just outside the first three. He ended up eighth, doing well to hold off Tom Collins, a very strong Medway runner, in the closing stages. It was a terrific result for Dame in his first county championships.  Our next two home had contrasting fortunes. Dave Morgan, who regularly turns out for us in these championships, ran his usual steady race. It’s a strategy that pays off well in this race. He appears to start conservatively, but unlike others he probably doesn’t slow down significantly and therefore moves through the field steadily. Neil, who showed a glimpse of last season’s form at the South of the Thames race last month, was well up the field early on – had a sticky patch and then got back on track. Dave just got the better of him on the final stretch. Fifth scorer, chugging along in his distinctive style, was Phil Sanders with a very solid run. A little further back in (34th), was Joe Hartley, a good number of places up from last year. There were also good, competitive runs from a number of our other runners. Stuart Beaney was inside 50 and pleased to beat some familiar adversaries, including, like his younger self, a former Medway man, Tim Alexander. At the finish, Tim, after a decidedly brisk start, wasn’t too far behind Stuart. Then hard on the heels of Tim was the steadily improving Jonathan Beatty.  In terms of the six score Tonbridge were ahead of us by a fair distance in the scoring; 67 to our 97. However, interestingly, things were quite a bit tighter in the 12 to score. Both results should be seen very positively – both in the light of the fact that we were missing runners, and the fact that this year we had perhaps put less emphasis on the county championship compared to previous years.

Kent AC women have made a habit of picking up silverware this season – and the county championships proved no exception. For like our men, the women bagged two sets of silver in the three and six to score.

Even with Amy Clements missing (hopefully with only a minor setback) it was felt beforehand that we were going to be contesting for medals.  However, as the race developed, and we saw who Tonbridge had in their team, it became very clear that team gold would be a very tough ask. For as well as Lucy Reid, a runner Amy often has battles with, Tonbridge had also acquired two very classy masters runners who used to run for Paddock Wood. But undaunted all our runners ran extremely well. They were led home by Katie Rowland who seems to improve with every race. Katie was eighth, with some very good runners ahead of her. Then we had the next three runners home, Isabel Bradley 9th, Teresa Murphy ,10th and Jen Smith 11th – that’s what you call good packing!  Completing the six to score it was Alie Farrall, 14th and Catherine Kandie, 20th. Ali’s was a particularly good run. Something agreed upon by her uncle who apparently was something of a running legend in his youth. Post raise he congratulated Ali. It seems if this happens she knows she’s run well. As usual it wasn’t just the scorers who ran well – a look at the full results on the Kent County website will show that there a number of other really good runs. The squad’s terrific team spirit was amply demonstrated in this race.  For evidence of the commitment put into the race, one only had to see Isabel at the finish. Let’s just say she had given her all.

The races come thick and fast at this time of year and so this coming weekend our women will be back in action in the Surrey League at Wimbledon. If they can perform like they did in these championships, there should be another fine performance to report.