Kent were convincing winners in yesterday’s match at Tooting but were pushed hard by St Mary’s Richmond.  Urgent phone calls were then made to check whether results had gone our way in the other fixture.  After a tense period of worry it was finally confirmed that Bexley had beaten our rivals Cambridge Harriers by only 4 points meaning we go up on points difference.   Fingers crossed that when the scores are checked today that nothing changes!

Exciting times to be an athlete at Kent AC, the men’s British League Team also won promotion this season.

Thank you and well done to all the athletes who competed this season.

There were some excellent individual performances yesterday, many athletes covering several events:

Anything odd about this photo?

Kent AC’s women had a team of only 9 athletes but heroically covered almost all events.  In particular there were outstanding performances from:

The men had some high quality athletes on display as follows:

What a great day and a fabulous result as our A team really produced the goods on the day and WON the last British League of the season to secure promotion to Div 1.  We meet early at Waterloo station to avoid industrial action and had a good journey down on a really hot day with the team in good spirits.

We had our largest team of the year –  something to do with the fact that Joe Appiah had organised a stopover no doubt !  We had a solid start to the proceedings with Joe Appiah and a welcome returnee, Antoni Davis Philip, securing 8 points in the Long Jump and then Callum Robertson, on a trip down from Aberdeen, and Ethelbert Metzger secured 9 points in the Pole Vault. More solid points followed as Sean Breathnach, over from Ireland as usual, and Courtney Green secured a solid 14 points in the Hammer. We were securing points steadily, if not spectacularly, which was the same in the High Jump as Joe and our other guy down from Aberdeen, Ryan Hewitson, jumped well with best jumps of 1.68 m and 1.88 m respectively in  a high standard competition to secure 4th in the B and 5th in the A competitions. The first event of the day on the track, the 400m hurdles,  earned us another 8 points as Kehinde Dauda had responded well to a late call up as he came come in 7th place and Ethelbert also responded well to run in his first ever 400 Hurdles – showing promise int his new event for him.

So our usual slow start was well under way as 5 of our 6 weaker events had been completed and we were in 5th place yet only 20 points off the lead – such was these guys welcome contribution.

The 800 m was next up for us as Ben Harding ran well to secure  a good 3rd pace in the A string, coming agonisingly close to winning it, and Dan Pettit ran a good race to earn 5th place in the B string with a well judged run – he is one of the most improved athletes of the year. Next up was the 100 m where Nathan Brown stepped up to the A string due to an unlucky injury to usual 100 m runner Jon Browne and he performed well with a great 3rdplace in the A sting and new recruit George Huxley did well to run into a strong headwind and record a time of 11.5 secs. Then one of our stronger events where the 3000 m Steeplechase where Chris Greenwood performed with credit especially as he is currently in heavy training for the Berlin Marathon as he came home in4th place in the A string and he was backed up by Neil Phillips who  secured 3rdplace in the B sting.

By now we had clawed our way up to 4th place in the team competition and we were greatly helped in our quest to move higher in a good standard 110 m Hurdles as Ryan Hewitson, also down from Aberdeen, performed with credit as he came home in a time of 15.77 secs to secure 5th place. Then our charge started with Team Captain Joe Appiah leading the way in the B sting to gain a great win in a time of 15.70 secs to win decisively and they gained our first of our 20 point hauls or better on the day. Then we had a great result – a double win in the Discus as first Sean Breathnach threw 45’41 m to secure the A string win and then Courtney Green secured the B string win as he threw almost 40 m – due reward for the extra training he had recently put in. Next up were two of our stars Shawn Wright  and Conrad Williams who really delivered as first Shawn secured the A string win with a superbly judged run and a star run from Conrad who  secured the B string win comfortably to end a 17 year period in which he has achieved so much including many major games for GB and had the distinction of Captaining GB as well.

Next up was the  1500 m where Owen Hind and Ben Harding performed creditably as they secured 4th place in the A string and 5th place in the B string with Ben digging hard after getting some stick from the guy who was temporarily in front of him. Next up was the 200 m where first Nathan Brown and then Reece Dimesh performed solidly to both claim solid 4th places in the A and B stings respectively. We were in 3rd place by now and only 12m points off the lead  so it was all to play for !

The later events in the field were now coming in and a great Triple Jump result where Chuxx Onyia demonstrated his Scottish International pedigree as he won the A string Triple jump despite his restricting injury which had put him out all year – it was worth the trip down from Scotland to see the smile on his face. Not to be outdone our venerable Joe Appiah performed well to secure 2nd place in the B string and secure 2nd place and gain us 26 points. Then the Shot Putt as first one of our star performers of the season, Sean Breathnach, then threw almost 17 m to win comfortably and he was backed up well by Courtney Green who threw almost 13 metres to secure a fine 2nd place in the B string and add another 26 points to our total. We had clawed our way up to second place – one of the promotion slots but there were 3 events left !

The 5000 m was extremely tough with the temperature still 31* C  as last individual track event went off and straight away our two runners John Gilbert and late replacement Tom Mower went to the front and pushed the pace on relentlessly. Slowly other runners dropped off until there were only 3 left with 4 laps to our guys just losing out in the  final sprint to a top competitor from Crawley. They had given everything and secured us another 26 points into the bargain.

We dominated the 4 x 100 relay as our team of Darren Green, Conrad, George and Nathan Brown ran well and changes brilliantly and secured a fine win in an excellent time of 42.14 secs in windy conditions. We were in the joint lead with it all to play for in the 4 x 400 m relay so first Shawn Wright lead off the team to secure a lead as he handed over to new guy Harry Browning, who must wonder what he was letting himself into, yet he rallied well looking to lose a place but he dug deep to had over to Reece Dimesh still in 1st place. He then ran well and handed over in 2nd place but only a few metres down to none other than our own Conrad Williams. He took the lead and held the inside lane well as he went into 2nd gear before unleashing a trademark kick to secure an excellent win for the team and bring down a glittering career in fine style – he will be really missed in athletics inn general and will go down as our finest athlete in our 133 year history.

All that remained was for his statutory dunking in the water jump as a delighted team had secured promotion with an excellent win with everyone playing their part in true Kent AC style. 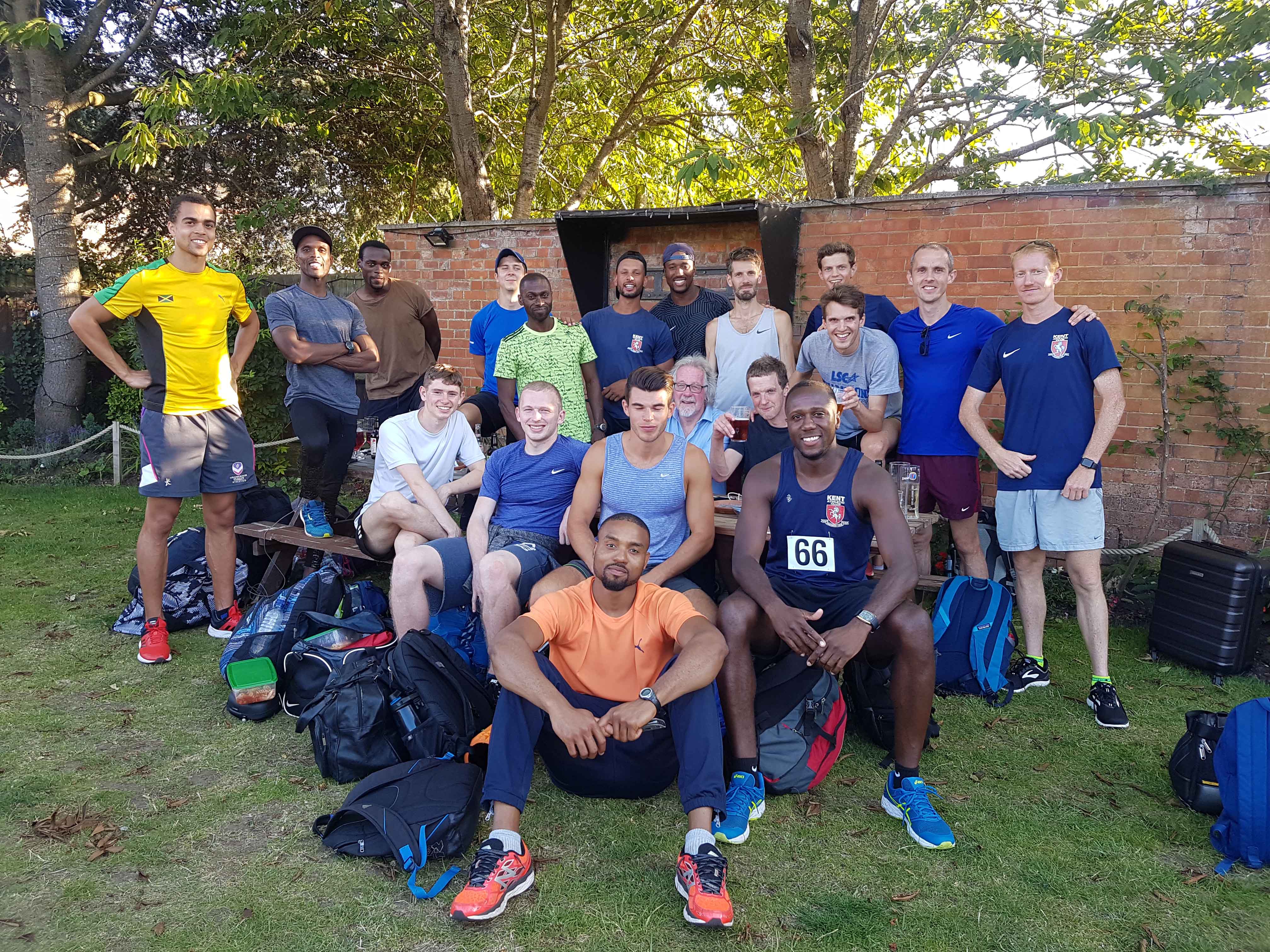 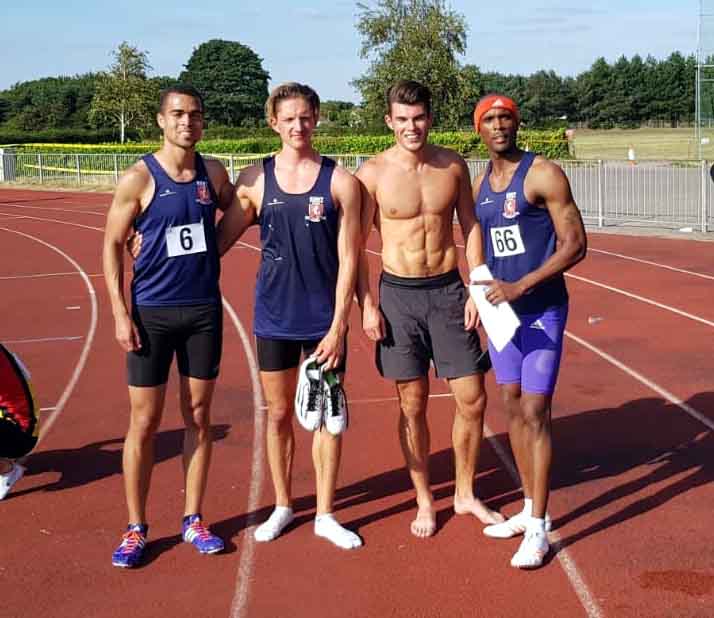 We performed brilliantly as a team by having our biggest team for the season of 23 athletes. We picked up points from every event and every team member place an excellent role to help up win the match by only 4 points. That meant the mastersplan has worked and we are promoted to British League Division 1 for next season. Overall league position being 2nd. We capped off a great day by winning both relays at the end. A lovely send off for Conrad Williams last race before his retirement.

Brilliant day for all involved. Very proud of the team today and thanks to all who took part and contributed this season.